After graduating from New York’s Franklin School for Boys, he attended the Art Students League in New York.  In 1946, he resumed his university studies and attended Hoyt Sherman’s painting courses, which had a significant influence on his future work. After graduation, he enrolled at the School of Specialization in Fine Arts. In 1951 he held his first solo exhibition at the Carlebach Gallery in New York, and the same year he moved to Cleveland, alternating several jobs: university art teacher, but also designer and decorator.

In 1956 he made the lithograph Ten Dollar Bill, which seems to anticipate some Pop Art themes. In 1957 he returned to New York, where he was hired as Assistant professor at New York State University. During this period, his works approached abstract expressionism and characters from comics or cartoons began to appear in his paintings, such as Mickey Mouse, Donald Duck and Bugs Bunny.

From 1960 to 1963 he taught at Douglass College, New Jersey. He knew Allan Kaprow, Claes Oldenburg, George Segal and also frequented the Fluxus artists, including George Maciunas and Dick Higgins. From 1961 he began to systematically insert in his works typical elements of the advertising world and comics, and to use the dotted Ben-Day, which would become his unmistakable stylistic feature.

In 1963, Philip Johnson commissioned a mural for the New York State Pavilion for the 1964 Universal Exposition. The same year he exhibited at Ileana Sonnabend in Paris and  Leo Castelli in New York. He creates his first sculptures in enamelled metal. In 1965 he made numerous ceramic works and devoted himself to the paintings of the series entitled Brushstroke. In 1966 he held a retrospective exhibition at the Museum of Modern Art in Cleveland and participated at the Venice Biennial, where he was also present in 1968 and 1970. The retrospective organized by the Pasadena Art Museum in 1967 also moved to Amsterdam, London, Bern and Hanover. He participated in the Kassel Documenta of 1968 and 1972. In 1969 the Solomon R. Guggenheim Museum in New York dedicated a retrospective to him. He became interested in experimental cinema and made three films on seascapes. He created the first mirror paintings and works on pyramids.

From 1972 to 1981 he worked on numerous “still lifes” and created works inspired by Futurism, De Stijl, Russian Constructivism, Surrealism and German Expressionism.  Numerous exhibitions were also staged in these  years. In 1981 the Saint Louis Art Museum organized a retrospective that moved to other American locations, Europe and Japan. 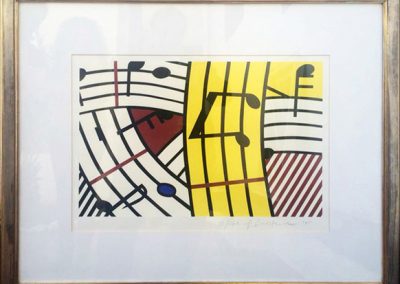