Born in the Kaunas district of Lithuania in 1939, he is one of the great masters of photography.  He received the Lithuanian National Prize for culture and art, the Order of the Lithuanian Grand Duke Gediminas and the Dr. Erich Salomon award.

He studied journalism at the University of Vilnius and was one of the co-founders and president of the Photographic Art Society of Lithuania, a centre for photographic  instruction and its diffusion which boasts artists such as Aleksandras Matsiyauskas, Algimantas Kunchius, Romualdas Rakauskas and Romualdas Poznerskis.

Works by Antanas Sutkus have been included in the most famous collections of art and culture around the world, including the Lithuanian Museum of Art, the National Library of France in Paris, the International Center of Photography in New York, the Dresden Art Gallery, the Victoria and Albert Museum in London, the Museum of Modern Art in Stockholm, the Art Institute of Chicago, the Museum of Photography in Paris.

The most important work of Sutkus is “People of Lithuania”, a project started in 1976, when Lithuania was still part of the Soviet Union, with the intent of documenting  changes in the life of the Lithuanian people, with works in black and white that dwell on the portraits of ordinary people.

He had the occasion of  spending some time with Jean-Paul Sartre and Simone de Beauvoir in 1965 when they visited Lithuania. 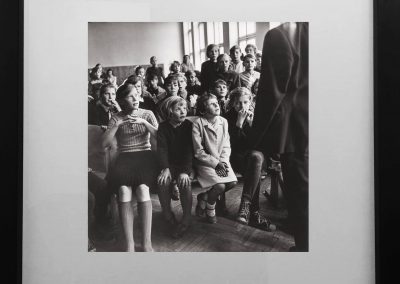