Together with his colleagues Vinicio Berti, Gualtiero Nativi, Bruno Brunetti and Mario Nuti, he was among the founders of the artistic movement called Classical Abstractionism. He was born in Florence on August 26, 1922. In 1947 in Florence, together with Vinicio Berti and later Mario Nuti, he founded the group of abstract painters “Arte oggi” which was part of the wider panorama of the Italian post-war avant-garde. The movement culminated in 1950 with the Manifesto of Classical Abstractionism, written by Ermanno Migliorini and signed by the five artists who subsequently dissolved the group. The intent was to dominate the pure form to build a new and rational art. In the sixties, moving to Milan, he approached the informal experience and created figures with organic features.  Then, in the second half of that decade, he organized his canvas into ordered surfaces with irregular contours.

In the early seventies he codified a true and proper language of evocative forms.  His paintings were composed of more ambiguous and complex spaces.  In this period the artist produced his most disturbing, and at the same time, fascinating works. The painting became a space where even the layman could find analogies and means of comparison with his own inner experience. This period culminated with the exhibition “I Demoni” (Demons) (1970) at the Schubert Gallery in Milan.

In the second half of the seventies, there was a return to geometrics and an interest in the scientific analysis of the perception of space, in the belief that apparent reality has uncertain contact points with a hypothetical real objective. During these years, he was professor of Theory of Form, Theory of Colour and Descriptive Geometry at the Higher Institute of Architecture and Design in Milan. These studies continued in the eighties with some realizations also in the field of design and architecture (with coordinated coverings for walls and floors, a series of doors that when closed opened new spaces,  the design for a  ‘made to measure’ meeting room at the Snam projects in Assago , Milan). In 1982, on the request of the Uffizi Gallery in Florence, which organized a collection of self-portraits of the most representative Italian artists, he realized and donated his self-portrait done in a key coherent to the latest research on psycho-plastic surfaces associated with the theory of colour. Finally in 1986, a year before his death, pervaded by the renewed need to communicate a certain lyricism, he made a series of works that fatally took on the appearance of a summary of previous experiences: geometric rigor, formal introspection, the science of perceptive. 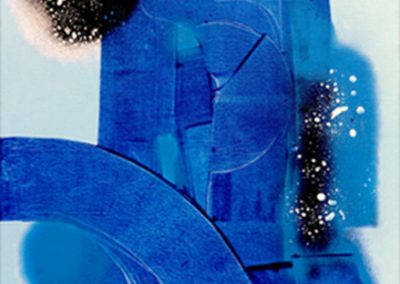 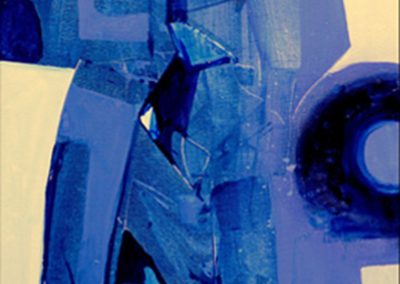