Friederike Oeser lives and works in Munich. He worked as an commercial graphic designer in both Munich and London. His artistic activity began in 1989 and since 2000 he has been a teacher of Free Design at the Academy of Fine Arts in Munich. He has undertaken numerous trips abroad, also for his artistic studies, the latest of which being to Thailand and the United States. His work evolves in a playful context that characterizes narrative ideas with an invitation for various spontaneous interpretations. This way of working is not typical of the work in a studio, but rather of the open space. His studio is instead the place where he plans his journeys according to his artistic research. His life is full of movement and  travel is the true content of his work. Moving around freely, to be able to stop and give time to the his curious eye to assimilate and elaborate what it perceives. This is his inner driving force. So many small environments, so many subtleties and opportunities to enter into the very spirit of things, until his research is fully satisfied.  What is evident  is not described in his works. Reality dissolves and the forms that are derived from it are recomposed in a different way to allow each viewer a completely personal interpretation. His works possess the quality of directly or indirectly soliciting new discoveries. His works, all on paper, live in light and fresh colours, in a new and engaging language. Reading Friederike Oeser’s works requires concentration and passion, those works which the artist expresses in creative phrases. 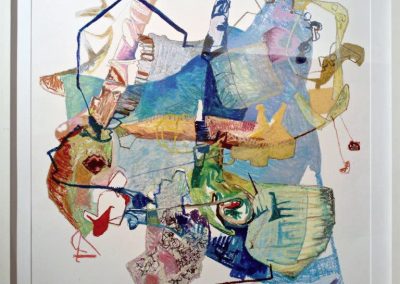