Born in Rome in 1927, he was a painter who contributed to the spread of Abstractionism in Italy.
After studying architecture, as a young man, he came into contact with the Abstractionist  current and its major exponents. From 1945 he participated as a leading exponent in the activity of the group Arte Sociale. Together with his friends Lucio Manisco, Mino Guerrini and Achille Perilli he attended the studio of Renato Guttuso in the first post-war period, but soon he moved away from the thesis of socialist realism and joined the Abstract movement.
In 1947 he was among the signatories of the Manifesto of the Forma 1 Group together with Mino Guerrini, Achille Perilli, Antonio Sanfilippo, Giulio Turcato.
With Perilli and Guerrini in 1950, he opened in via del Babuino in Rome, the gallery-bookstore “L’Age d’Or”, which in 1951 was to merge with the group “Origine” with Mario Ballocco, Alberto Burri, Giuseppe Capogrossi, Ettore Colla, creating the “Fondazione Origine”, in the ambit of which Colla and Dorazio published the magazine “Arti Visive”.
In 1953 he moved to New York where he had his first personal exhibitions in the Wittenborn One-Wall Gallery and in the Rose Fried Gallery and came into contact with the main artists of the time, such as Willem de Kooning, Mark Rothko, Jackson Pollock, Barnett Newman, Robert Motherwell and the art critic Clement Greenberg. During this period, Dorazio also concentrated on the study of the writings of Vasilij Vasil’evič Kandinskij, whose theory on the immaterial aspects of painting would greatly influence him.
Back in Italy, he continued exhibiting at Galleria Apollinaire in Milan, at Galleria del Cavallino in Venice in 1955 and at Galleria La Tartaruga in Rome in 1957, and participated in numerous fairs such as Documenta 2 in Kassel (1959), at the Venice Biennial (1960, 1966, 1988).
He exhibited at the Galerie Im Erker, in San Gallo where he established an artistic partnership with Giuseppe Ungaretti: in fact for the occasion Ungaretti wrote an essay on his painting for the presentation of the catalogue while in 1967 Doraziol created a series of graphics to accompany a collection of poems by Ungaretti entitled “Luce” (Light).
In 1989 he collaborated on the project of the Fiumara dell’arte in Tusa, a large open-air museum park of contemporary art created by Antonio Presti, with a colourful ceramic decoration at the barracks of the Carabinieri at Castel di Lucio created in collaboration with Graziano Marini.
Together with Marini, in 1996 Dorazio also created the art room of the Atelier sul Mare in Castel di Tusa entitled ‘La Stanza della Pittura’ (The Painting Room). In 1994 he set up permanent artistic interventions at the Maison des Arts in Pescara.
He died in Perugia in May 2005. 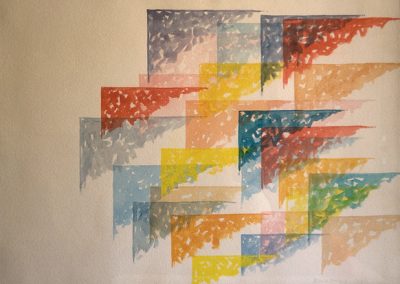