Born in Rome in 1932 into a family of artists. Her father Mario, a sculptor and her mother Francesca, a painter and a talented puppeteer.
One of her first exhibitions was in 1956 at the Venice Biennial.  Numerous personal and collective exhibitions followed in Italy and abroad.  In the 1960’s-70’s, she created a series of canvases with silver images that received immediate attention.
In 1968, Giosetta temporarily moved away from painting and put on a performance,  “La Spia ottica” (The Optical Spy), to inaugurate Teatro delle Mostre at  Galleria Tartaruga in Rome.  In 1969 she created the first “Teatrino” (Small Theatre), a toy for adults (“giocattolo per adulti”) in painted wood. Through a lens you could look inside and see an assembly of miniature objects.
During the seventies Giosetta lived for long periods in the countryside in the Treviso area together with the writer Goffredo Parise. Her interests focused on legends of country spirits, dreamlike and visionary stories, from which a series of works dedicated to the Fairy Tale world and the rediscovery of childhood were born.
In the eighties we can call to mind the pictorial cycle “Il vero” to which some paintings exhibited here belong. From that same period is the series of pastels and oils dedicated to Gian Domenico Tiepolo.
In addition to continuing with painting, to which Giosetta still dedicates herself constantly in the large studio-laboratory in Via San Francesco di Sales in Trastevere, the artist took up  ceramics in 1993. She began to work at the Bottega Gatti in Faenza and from then on was increasingly engaged in the creation of important sculptural cycles.
Very much inclined to experimentation, at the age of 80 she ‘got back into the game’ to realize an artistic project conceived and created together with the photographer Marco Delogu.  Giosetta Fioroni, made- up,  dressed-up and transformed into countless personalities (from the Madonna to a prostitute) before the eyes of the photographer.  The result of the work was exhibited at the Macro museum in Rome in the exhibition “L’altra ego”.  Furthermore, the National Gallery of Modern Art in Rome  proposed two of its exhibitions in 2014, which goes to illustrate the complexity of the artist’s multi-faceted production. In the “L’argento” exhibition, organized in collaboration with the New York Drawing Center, you can see the collection of her works from 1960’s to 1975, in which she mainly used  silver colour for her drawings and canvases.
From the very beginning of her artistic career, Giosetta has had a constant relationship with writers and poets, including Parise, Ceronetti, Arbasino, Zanzotto, Garboli and many others with whom she has created books, graphic editions and art works on paper. 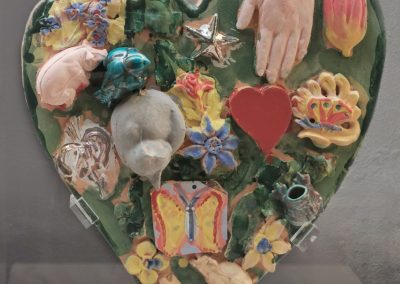 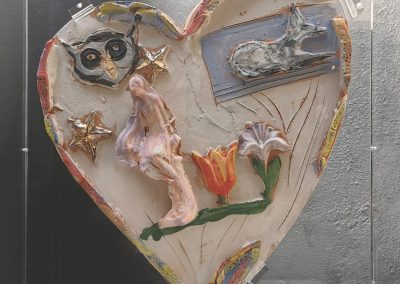 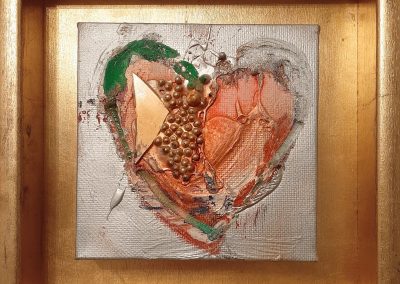